Today is the last day of the Health Activist Writer's Month Challenge (#HAWMC) for Wego Health. I always love participating in these challenges as if forces me to make time to write and I don't force myself enough. So thank you to all who checked in on my posts thru the month and a BIG thank you to those who stuck it out with me all month long! I am humbled that you take time out of your day to listen to my stories.

Posted by the Loving CHRONICles at 1:19 PM 3 comments:

What do I wish I would have known at the beginning of our patient journey that I know now?

That it will be okay.

But seven years ago when we were at the HTC with our then newborn baby boy waiting on a diagnosis I would’ve never thought that. Then getting the hemophilia confirmation and a three day stay in the NICU…I would’ve said, “no way”. As Jackson got older and my heart jumped to my throat with each new milestone I realized that it IS going to be okay.

We now self-infuse and have been for a while. I’ve met with local and state Congressmen to advocate for hemophilia. I’ve always had a voice but it’s become louder and with specific purpose. If you would have said I would be a mentor to newly diagnosed families I would have said, “You’re crazy”! Or blogging for our hemophilia adventures or serving as a Board Member for our local Chapter?! Say whaa?

This week I sat on a panel discussion for hemophilia with our local chapter and HTC for newly diagnosed families. I was them not that long ago. To sense their fears, concerns and knowing what the road ahead looks like for them but knowing in the end they will ultimately be ok. Their family unit will be stronger and they will be well equipped to speak their mind for their sons who are not yet able to speak. It’s a journey I’ve come full circle in and yet I’m still learning.

So if you are a newly diagnosed family or established family with a bleeding disorder that needs some encouragement…It’ll be okay.

Posted by the Loving CHRONICles at 1:17 PM 2 comments:

Consider yourself lucky that you or your child doesn't have a bleeding disorder.

Consider yourself lucky that you have never had to poke your baby and do an IV infusion three times a week; sometimes more.

Consider yourself lucky that with any bump, scrape, bruise you can hug your kid, dry their tears and send them on their way without wondering if that is something you might need to infuse for.

Consider yourself lucky that you have no idea how expensive it is to have a hemophiliac.

I have a 7 year old son, Jackson. He was born with severe hemophilia A, factor VIII deficiency. He is missing a protein that makes his blood clot. We administer infusions twice a week to clot his blood and let him be a "normal" boy. You cannot see hemophilia. What you can see is a handsome blonde haired, hazel eyed boy who is solid, has a great smile, is competitive, loves to give hugs, has a caring heart and talks about and play sports.What you cannot see is an internal bleed. He can feel it and many times he feels is before it swells and we can physically see it. He may need to ride in a wheelchair, even though he has no visible broken bone casts, because he can't bear weight on his foot due to an ankle bleed. He may need to use crutches because he has a joint bleed. He may look like he is "faking" an injury but he isn't. Just because YOU can't see it doesn't mean it doesn't exist.

I'm not sure what myths/lies you've been told about hemophilia but it did not come about from incest, as much as TV loves to glorify things. Yes, hemophilia was known as the Royal Disease as members of many royal families did have hemophilia. No, hemophilia is not contagious. No, my son will not bleed to death from a paper cut...he will bleed, a little longer than you, but he will not die (and we've been asked that a million times!!) My son can be a rowdy, rough and tumble boy like any other boy.

Hemophilia can side line him from having fun just as a cold or allergies can side line us for a day or two. We have brought our son up letting him know that hemophilia is just a part of him...it doesn't make him who he is. Jackson is wise beyond his years. He understands compassion for all. He knows physical pain and emotional hurt. He knows empathy.

I don't blame you for not knowing about hemophilia. There are plenty of illnesses and diseases I know nothing about. Ask questions, don't assume you know anything about hemophilia. And if you are asking question please listen to what we have to say. And most importantly, treat my son like a human. He has thoughts and feelings too. Showing compassion is a wonderful trait and appreciated by the ones who need it most.

Posted by the Loving CHRONICles at 1:00 PM 3 comments:

As we all know, hemophilia gets in the way sometimes. A bleed can stop us from having fun. A bad stick, be it an IV infusion or a port stick can be awful. Unfortunately, we've all had bad days. But today I'm to share with you 5 tips on how to make a bad day, a good day!

1. Take a deep breath. It's a moment in time...take it minute by minute if you need to but know that it doesn't have to ruin your entire day.

2. Focus on the positive. You've got a bleed...now you have time to watch that series on Netflix that has been on your wish list!!

3. Lean on your family or friends. You know, the supportive ones. And if you don't have one then go on Facebook and chat with the hemophilia community...there is always someone on line!

4. Tomorrow is a new day. Fresh eyes on a new day gives you perspective and the opportunity to be thankful, yes, thankful, even for those crappy days.

5. Get some rest. I know, I know, I need to listen to my own tips but even a 15 minute cat nap can make your attitude and mood that much better. It can give you the added strength to tackle the situation.

I hope you have a great day!!

Posted by the Loving CHRONICles at 3:15 PM No comments: 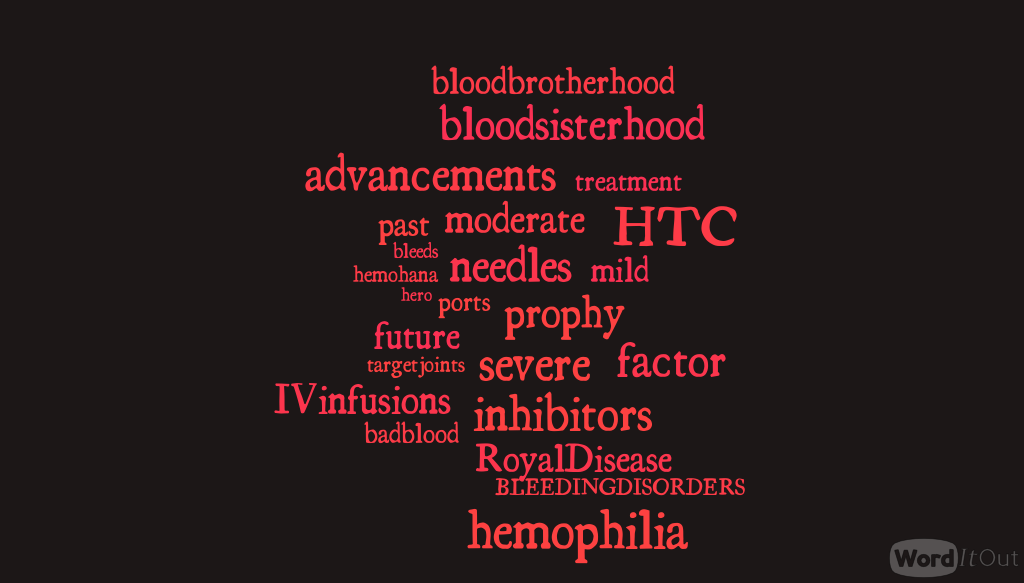 How do I maintain a healthy lifestyle? What is my favorite exercise? How do I manage fitness with a chronic illness?


I have shared before that I enjoy running. I am currently training for a big marathon here in Cincinnati, Ohio; it's the Flying Pig. I am running the half marathon which is 13.1 miles. I have run the half twice before but this year I have committed to train with a running group. I didn't think I would like it but it has turned out to be fun running with others. Plus I have had a run scheduled every Tuesday evening and Saturday morning since January no matter the weather conditions. My hubby has our one car garage (sometimes much to my dismay) set up as a gym with flat/incline benches, weights, roman chair, straight bars and punching bags. I like to join him out there for strength training but don't get out there as often as I would like. I also like to take walks with my son to the local library. It's about 4 blocks over and as he said yesterday on our walk, "this gives us good talking time"!. Our family is constantly moving so being active is not only necessary but a way of life for us.

Jackson manages fitness with hemophilia by doing what he wants without me restricting him, unless, of course, he has a bleed. Ever since he could walk he was like the Energizer Bunny...he keeps going, and going, and going. He literally will go until he climbs into bed and then is out like a light. He enjoys participating in sports; so far he has played basketball and currently he is playing flag football on a local high school's field turf. Last week he made two touchdowns and got to play in the rain!!! He loved it!! Our family is always on the move and he likes to keep up and have fun. Our philosophy is to let him have fun...we can treat a bleed!

Posted by the Loving CHRONICles at 4:33 AM 3 comments:

the Loving CHRONICles
Batavia, Ohio, United States
We are a family of 6. Our two biological daughters and foster daughter have type 1 diabetes and our son has severe hemophilia. These are our stories of living, dealing and thriving with chronic illnesses.